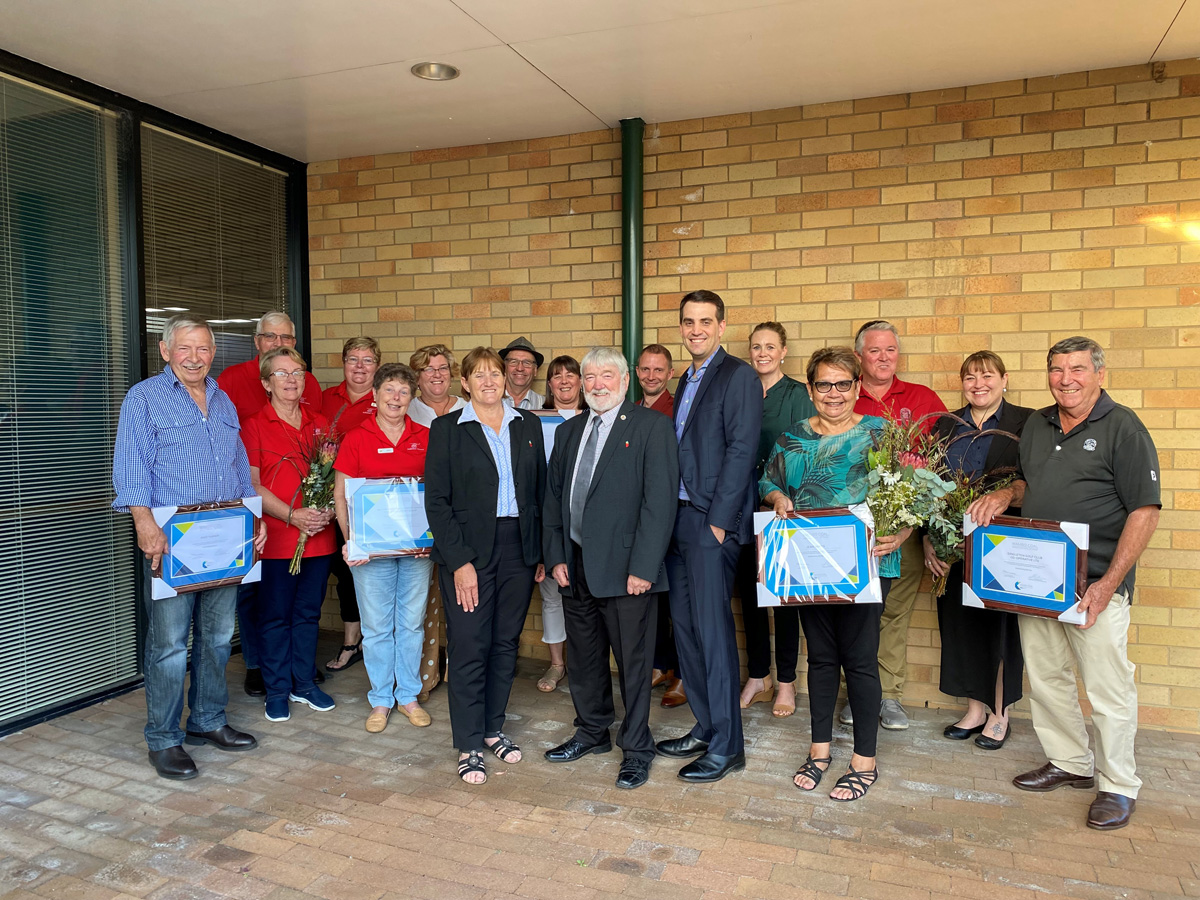 Two individuals and three community organisations have been inducted to the Wambo Coal Singleton Hall of Fame at a special COVID-safe event at Singleton Civic Centre recently.

Singleton Golf Club and the Westpac Rescue Helicopter Service – Singleton Support Group, which has raised more than $1 million for this critical service, were also recognised for Community Service, and Singleton Theatrical Society (SATS) was inducted in the category of Arts, Science and Education.

Run in a partnership between Singleton Council and Peabody Wambo Coal since 2009, the Hall of Fame recognises and honours those people who were born in, or have a strong association with Singleton and who have attained prominence at a State, national or international level in their field of endeavour.

General Manager Jason Linnane said it was a wonderful occasion to celebrate Singleton’s outstanding citizens after a challenging year.

“Council is proud to be the custodian of the Wambo Coal Singleton of Hall, which over the past 12 years has grown to honour 64 individuals, families and community organisations who have given their time and energy for our community, or who have excelled on the state, national or global stage,” he said.

“On behalf of our community, I’m proud to now see five more pavers that will be added to this very prestigious list to recognise two very deserving individuals and three organisations that contribute so much to our community.

With 21 years as the first Aboriginal Liaison Officer for the Upper Hunter with Hunter New England Health, Jean is a well-known and respected Aboriginal elder who for the past six years has been the Chair of the Wanaruah Local Aboriginal Lands Council (LALC). She is also a member of various local Aboriginal committees including Singleton NAIDOC Committee, Upper Hunter NAIDOC Committee, Singleton Aboriginal reconciliation Committee and Mach Energy Mount Pleasant ACDF. Jean’s community involvement spans many years and causes, including Youth Off the Streets Op Shop and Singleton Neighbourhood Centre, where she cooks meals for Singleton community members.

Our current 2020 Singleton Citizen of the Year, Fred is well known and respected as a member of the Rural Fire Service and volunteer in the local community. He has devoted the past 38 years to the RFS with Carrowbrook and Glennies Creek brigades, in addition to being a Group Captain in the Hunter Valley Team and champion for the advancement of the brigade infrastructure and mobile assets.
In addition to serving on the firefront in some of our worst incidents, including the unprecedented fires of 2019/2020, Fred is an active member of the Hunter Valley RFS Learning and Development Committee and has also given extensive time to the advancement and promotion of the NSW Rural Fire Service through his continued involvement and participation in Incident Management Teams.

Golf was first played in Singleton in 1910, and not long afterwards, in 1922, a golf club open to all residents of the town and district was formed. The first links was developed at Gowrie in a paddock below the water reservoir, until the current course in Howe Park, opened on 26 March 1927. The original clubhouse was replaced with a new structure that was opened on 19 February 1955 – just a week before floodwater covered the fairways and greens and resulted in many tons of silt and sand being removed from the site.

The Golf Club continues to maintain and develop the course at Howe Park, which is now described as a nine-hole parkland course in the heart of Hunter Valley with over 500 members. For the last 100 years, the Golf Club has been an integral part of Singleton, supporting other sporting groups, community groups and the wider community through fundraising, as a sporting venue and a range of activities.

SATS has been a Singleton institution since about 1980, providing family entertainment that has fostered the talents of many members of the local community including actors, directors, technical and backstage crew for over 40 years. SATS’ major annual production is an important cultural event for Singleton, and is the culmination of six to nine months work by many members of the group both on and off stage. In addition to being entertaining, however, the productions also assist local community groups and charities with their fundraising.

SATS is deeply involved in the community by providing entertainment at local events including our annual Australia Day celebrations and numerous Christmas functions, as well as assisting local schools and other organisations with sound and lighting equipment as required.

Westpac Rescue Helicopter Service – Singleton Support Group (Community Service)
A group of Singleton residents with a shared passion and drive to raise funds for the Westpac Rescue Helicopter Service formed the Singleton Support Group in 1997 and in the past 25 years has raised more than $1million. The money has supported the four helicopters operating from three bases in Newcastle, Tamworth and Lismore, servicing 1.5 million people from the Hawkesbury River, north to the Queensland border with an experienced operational team are on call and ready to respond.

Singleton holds a significant place in the Service’s history as where the Rescue Helicopter Service’s very first Inter-Hospital transfer was undertaken.

The Singleton Support Group has become a driving force for fundraising and advocacy for the Rescue Helicopter Service, attending local community events such as Broke Village Fair and the Coal Festival, selling raffle tickets and merchandise, running buses to wine and food events, hosting trivia nights, running weekly meat raffles at a local hotel and most recently, successfully hosting a major sporting competition with the Mining Charity Rugby League Day which has become a feature of the local event and sporting calendar.

Media release and image courtesy of the Singleton Council.